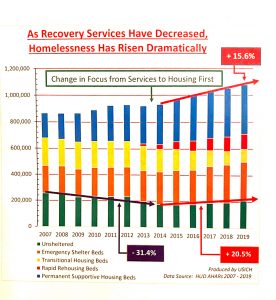 Notice a 31% decrease in street homelessness before the Housing First began to be chosen as a “Single Bullet Solution” to “Solve” homelessness after others had merely “managed” the issue. The chart also shows the impact on the United States, on the “unsheltered” population going up by 20.5%. 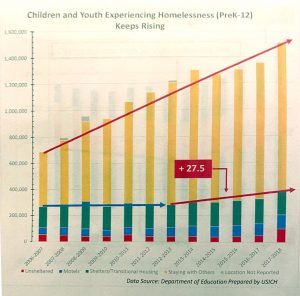 We also see a rise in youth and children going into “shelters/Transitional Housing” and “Staying with others”. 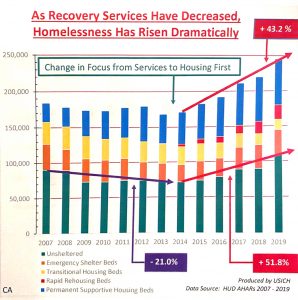 The 3rd chart shows impact on California, street homelessness – this is evident since we see Emergency Shelter Beds up 51.8% since Housing First was introduced as “Solution”.

Bottom line; Intuition before, during, & after transition suggested that focusing on a few chronically homeless people & leaving the many on the streets would backfire & not reduce chronically homeless individuals but would multiply them exponentially. These charts show the intuition was correct. Notice areas most negatively impacted by resources moving to Housing First was transitional housing & Faith-Based Recovery & Shelter. @ Hotel Mazarin

Chart Source is from USICH  interpretation is from  Andy Bales

Sign up to receive heartwarming stories, updates, and more delivered to your inbox.