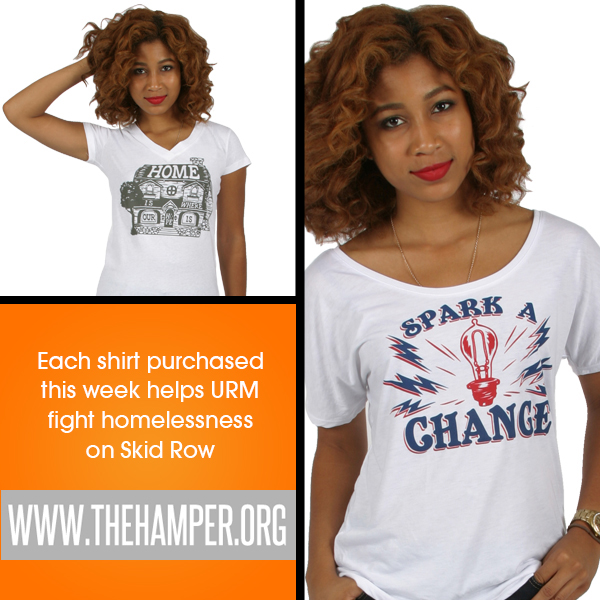 Homelessness has a face…

And it might not be the face you imagine. It’s a mom struggling to feed her kids. A man who lost his job. It affects Mothers. Fathers. Sons. Daughters. Brothers. Sisters. It could be you or me. And it’s up to us all to help end the tragedy of homelessness.

For over 120 years, Union Rescue Mission has served men, women and children experiencing homelessness. URM provides comprehensive emergency and long-term services to their guest to help them escape the dangerous streets of Skid Row.

By purchasing a shirt this week from The Hamper, you are helping to provide meals, shelter and life-changing services to those who are experiencing homelessness in Los Angeles. Bring hope and healing to a changed life – help someone find their way home today!

Visit www.thehamper.org to view the rest of the collection! 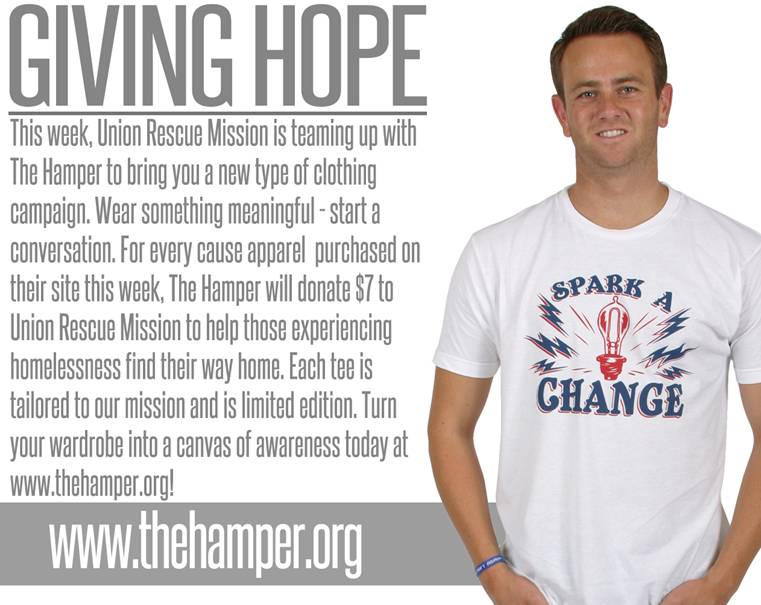 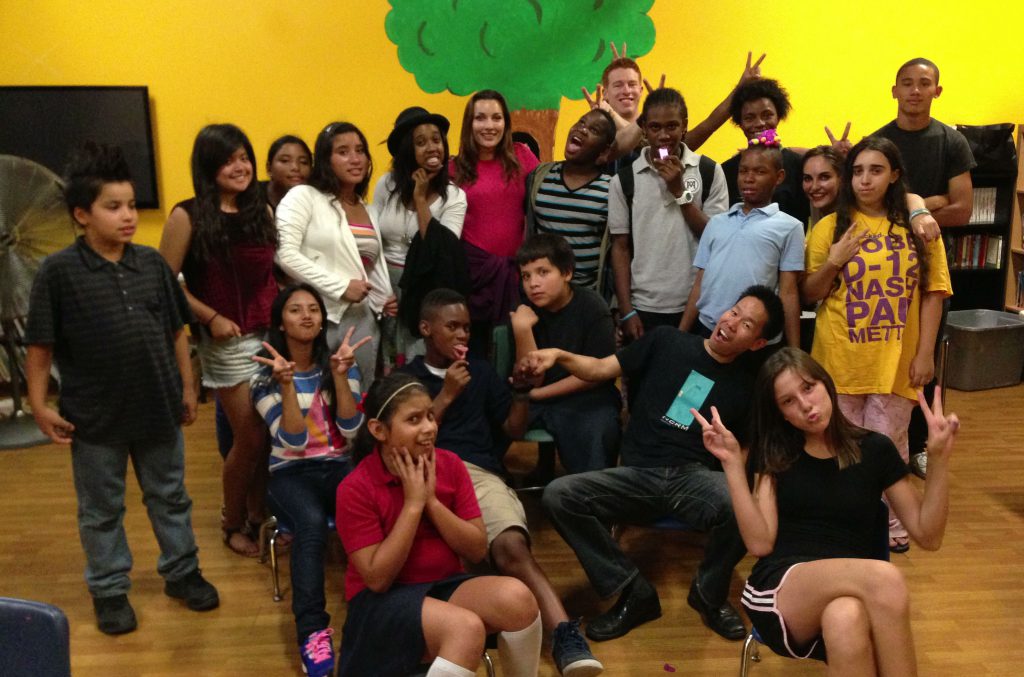 And that’s how my first experience at the teen LifeSkills class began. I had tried to blend into the background, to be an invisible observer, but that just wasn’t an option. On Monday nights, everyone participates—everyone is part of the group. 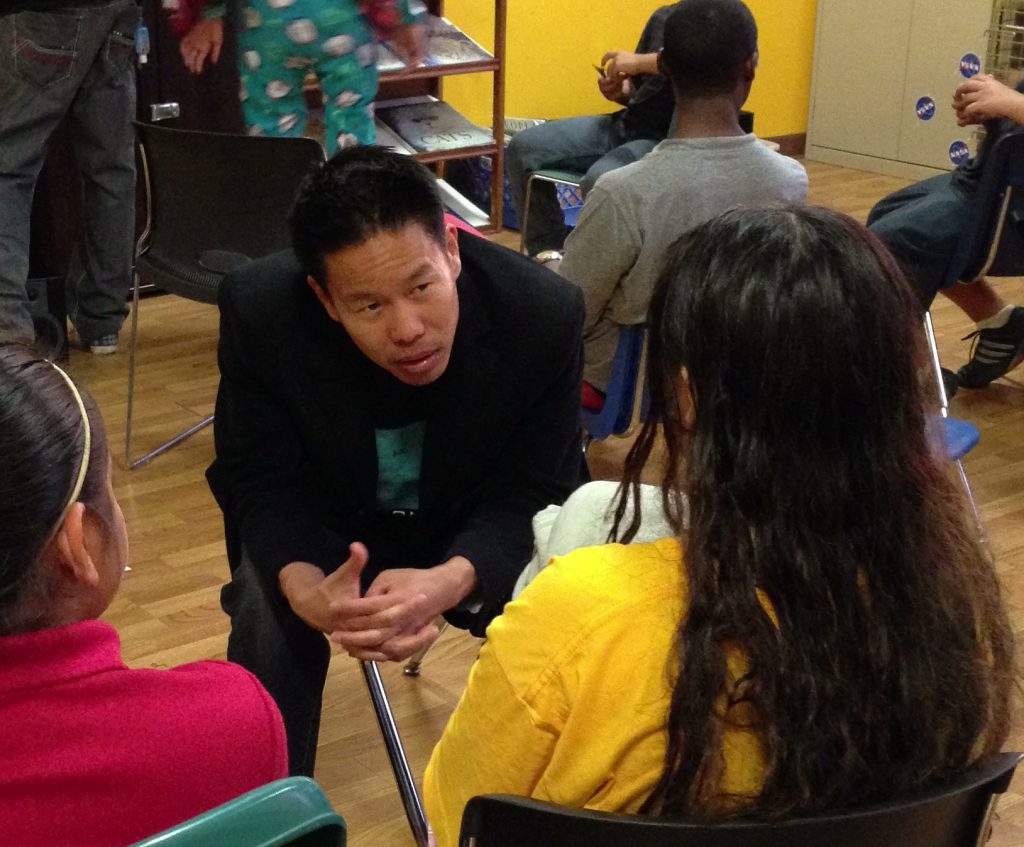 These Life Skills Classes have been going on for almost three years—this particular one was class #126. Christopher Kai (an entrepreneur among many other things) is the lead volunteer, and has devoted every Monday night (sans holidays) to enrich the lives of the teens at the Mission. Each lesson encourages, inspires, and teaches the students how to work toward their dreams. He also has an awesome and diverse group of volunteer mentors: a former marine, an preschool teacher, a wealth manager, a model/photographer, and a ballerina. 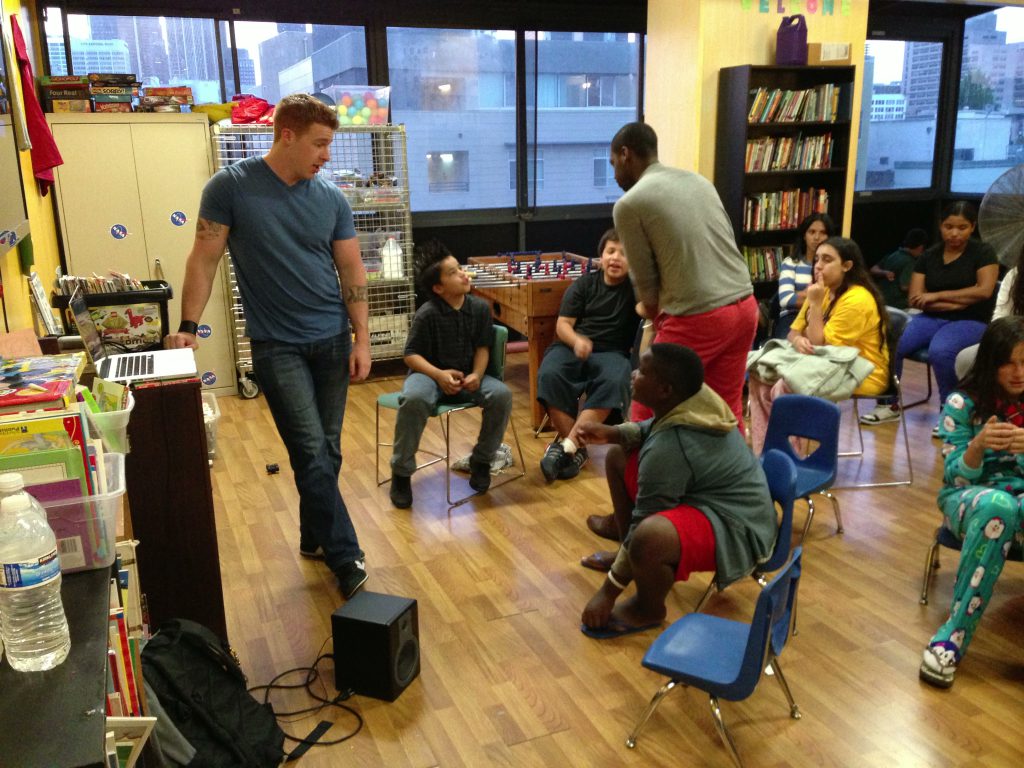 From the moment the door opened up you could feel the excitement emanating from the teens. As they entered the room, their faces would light up—one right after the next. You could definitely tell this class was one of the highlights of their week, a place of retreat from the monotony of Mission life. Out of the corner of my eye I could see Chris approach all of the first timers and make an effort to memorize all of their names. Impressive indeed.

Today’s meeting revolved around the 50th anniversary of Martin Luther King’s “I Have a Dream Speech”. 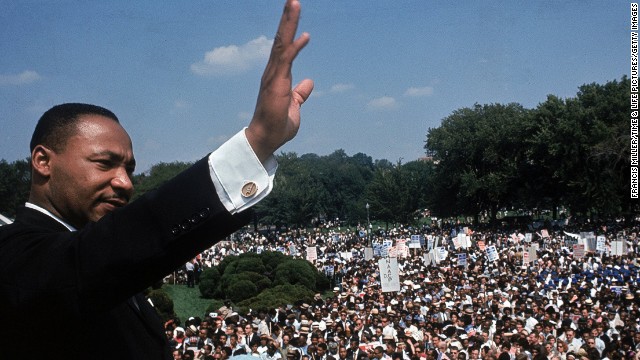 “We are each made exactly 99.6% the same,” Chris explained as he pointed to individuals in the group. He continued on how MLK fought for civil rights and how it’s significance in history affected not only those in America, but to all people worldwide.

We were then broken up into three groups in a little exercise to the roof.

Each group was given a mentor and instructions on how to tackle the flights of stairs before us. The first group would ascend to the top by skipping as many steps as possible, the second would skip every other step, and finally the third would take every step. 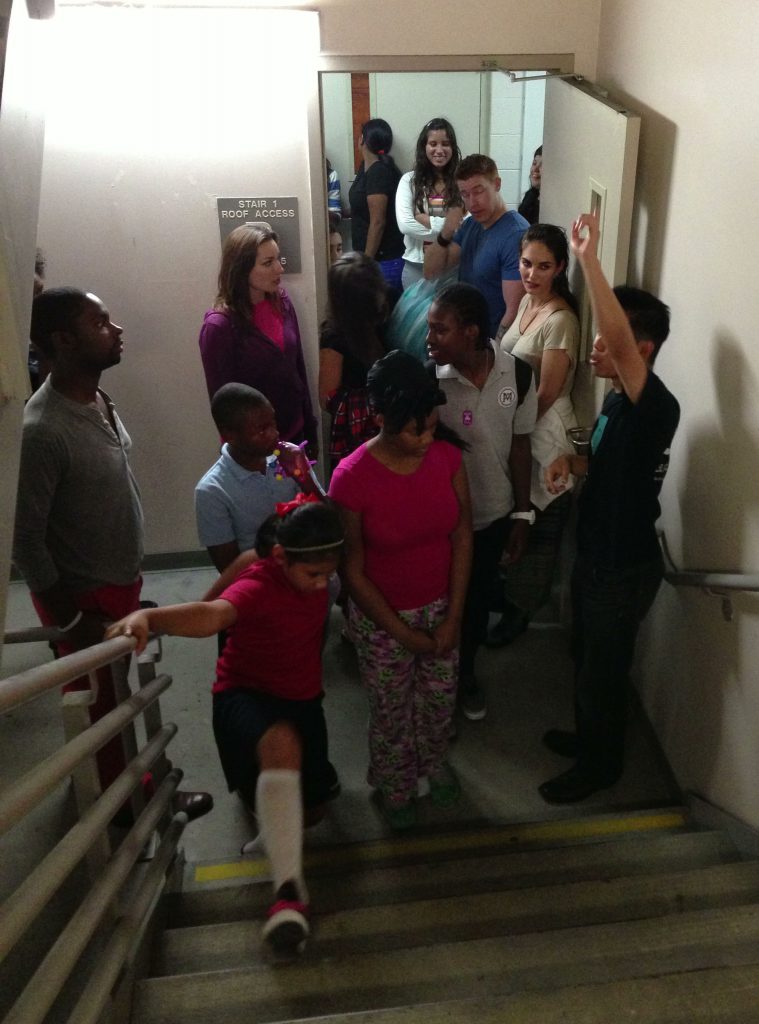 When all of us finally reached the rooftop we regrouped under the cityscape of downtown LA. The exercise was designed to show that whether we are skipping steps or taking our time with each individual stair, we are all on our individual journey. All we needed to focus on is our dreams and the goals we needed to set to get there.

If anyone is interested in volunteering, please visit: www.fb.com/mondaysatthemission or email Christopher Kai directly at Chris@christopherkai.com 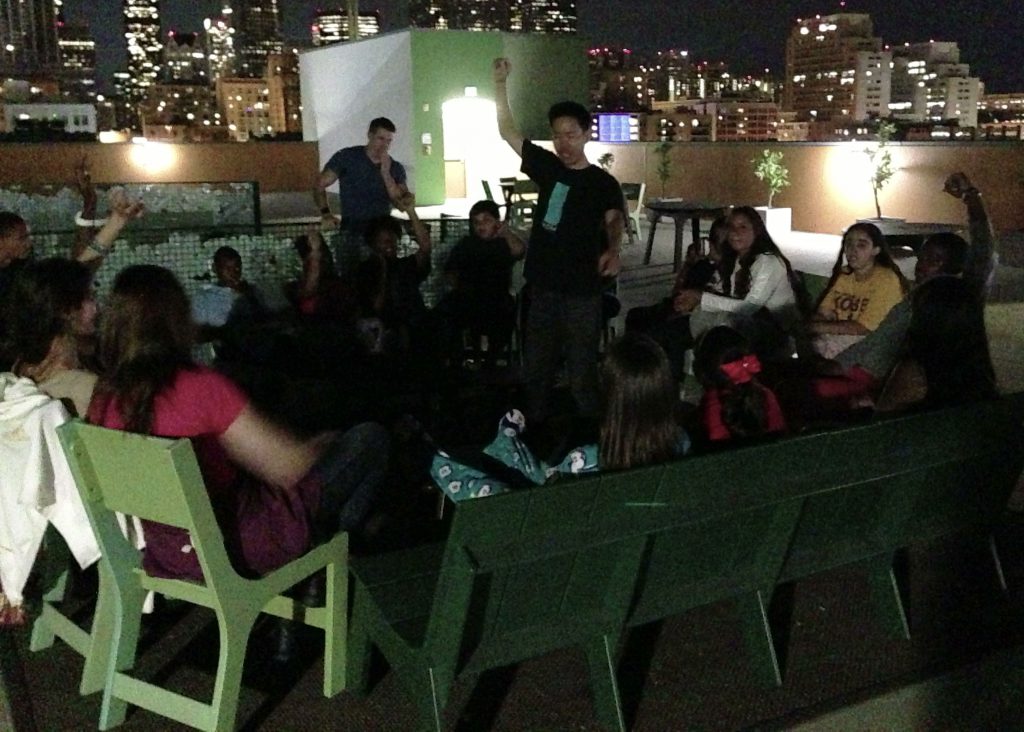 Union Rescue Mission’s CEO Andy Bales is concerned about what will happen to the individuals who sought shelter over the last few months and would love to see the shelter remain open.

But the chances of that happening are slim, said the Rev. Andy Bales, chief executive of the Los Angeles Union Rescue Mission, the shelter’s operator.

“Not only do we have to contend with the shrinking economy and growing unemployment, which I believe is actually closer to 20%, but now we’re in the process of listening to complaints from neighbors and doing our best to address them,” Bales said. “It’s something that needs to be done to keep us up and running.”

Bales said he met Friday with Councilman David Gordon, who shared with him some of the community’s concerns. Among them are problems with loitering, public urination and homeless people arriving at the shelter at all hours of the evening.

Another complaint lodged against the Union Rescue Mission and EIMAGO Inc., the nonprofit that takes care of day-to-day duties, is that volunteers have failed to keep criminals away, specifically sex offenders.

To tackle issues of loitering and walk-ins, Bales said, the Union Rescue Mission has spent about $40,000 on increased shuttle service to and from the facility in the last month.

Click Here to read the rest of the article.

Click here for more information on the current situation with the Burbank Winter Shelter.

The California Budget Project estimated 234,400 children statewide could be dropped from the welfare rolls, including 75,380 in Los Angeles County. Additionally, in- home care services for 81,000 Californians, including 34,290 in the county, could be eliminated.

Andy Bales, president of the Union Rescue Mission, said the possibility that tens of thousands of children could be cut from the welfare rolls would only exacerbate the rapidly growing homeless problem in the county.

“Our fourth floor is completely full of homeless families and we have begun to fill up our chapel with families sleeping in pup tent-like units.”

Union Rescue Mission was glad to read the latest article from Andrew Blankstein and Cara Mia DiMassa of the Los Angeles Times about the decrease in deaths on skid row.

The number of people who died on downtown L.A.’s skid row has declined by 36% in the last four years, according to city records, the latest sign of major changes on what for decades has been the city’s epicenter of homelessness and drug-dealing.

Excluding murders and suicides, 60 people died in the skid row area in 2008, according to Los Angeles Police Department statistics. In 2005, there were 94 such deaths.

60 deaths is still far too many, 1 is too many, and we won’t slow down our efforts until the day when no deaths are reported and we live up to our title as the City of Angels with no human being having to live on the mean streets and sidewalks of Skid Row.

At Union Rescue Mission we have taken several steps to assist in this effort.  During the summer heat in LA we deliver over 1500 bottles of cold water each day that the temperatures rise to 85 degrees or higher.  You can see a documented case on video of a man whose life was saved through URM’s efforts by watching the video below.  URM has also played a major role in slowing the dumping, or improper dropoffs of patients on Skid Row by area hospitals.  We’ve worked hard to make URM more welcoming and added  210 beds to help move people from the streets and supported the Los Angles Police Department with their Safer Cities Initiative.

Click here to read the rest of the article.

Cara Mia DiMassa and Richard Winton of the LA Times write about the recent settlement between the ACLU and the LAPD.

Los Angeles police officers face significant restrictions on when they can search people under a agreement announced Thursday that settles a landmark homeless right case.

The agreement comes 18 months after a federal judge found that the LAPD was unconstitutionally searching homeless people in the skid row area as part of Chief William J. Bratton’s crackdown on downtown crime.

Click here to read the rest of the article.

Jessica Garrison of the LA Times writes about the increase in families who are homeless this season.  Several individuals from Union Rescue Mission were interviewed.

The economic crisis and cold weather have created a larger than usual influx of families to shelters in Los Angeles County this year, according to shelter officials and other service providers.
On Wednesday, officials at the Union Rescue Mission, which runs the county’s cold-weather shelters, held an emergency meeting to figure out what to do when they run out of hotel vouchers for families, which could happen this month. The numbers, said Chief Executive Andy Bales, are sobering: The region’s winter shelters and the skid row mission have seen 86 families in the last three weeks.

By comparison, last year the agency took in 20 families at its emergency shelters over the entire cold weather season from Dec. 1 to March 15, with 15 to 20 more at its downtown mission. Two weeks ago, the mission downtown opened up its fifth floor to two-parent families and single fathers with children, something it has never had to do before. It may also convert its chapel to sleeping quarters.

Molly Hennessy-Fiske of the LA Times writes about the effect current laws have on the ability of Mental Health workers to effectively assist the mentally ill.

Alarmed by reports that Los Angeles County mental health staff — hobbled by a countywide shortage of beds for the mentally ill — are increasingly forwarding emergency calls to police, commissioners overseeing the department on Thursday asked that a plan to end the practice be presented by early next month.

Department of Mental Health workers have turned to law enforcement officials because hospitals are required by law to take emergency mental health patients transported by police. If a county mental health worker brings a person in for treatment, facilities are not compelled to accept them.

URM’s Andy Bales talks about the importance of utilizing Mental Health professionals in dealing with patients on skid row.

Advocates for the mentally ill and the homeless say that there are not enough hybrid teams to go around and that police who respond alone can aggravate emergencies.

“Folks who are trained to deal with people who are having mental health issues have the experience to calm things down,” said the Rev. Andrew Bales, chief executive ofUnion Rescue Mission on skid row. “Somebody who’s distressed is probably going to panic when they see the police. I’ve been in that situation where I’ve been trying to help someone and they became upset when the police arrived.”

Troy Anderson interviews Andy Bales and some friends of ours at Union Rescue Mission regarding the increase in middle-class professionals who are struggling with homelessness.

As a middle-class father and business owner, he had achieved the American dream. But that all came crashing down recently when his coffee-bean importing business went under and the home he was renting in El Segundo went into foreclosure.

With nowhere else to turn, the Westmont College graduate sought shelter for his family at the Union Rescue Mission in downtown Los Angeles.

Andy Bales, president of the Union Rescue Mission, said he’s also seeing professionals and other middle-class people coming into the mission who are experiencing homelessness for the first time, including former mission donors.

Richard Guzman writes about the drop in donations to organizations working on Skid Row.

Andy Bales has seen a lot of hard times during his years as CEO of the Union Rescue Mission. But now, the organization that for more than a century has helped those down on their luck is in need of desperate help of its own.

“We’re down about 25% over our normal donations, so we’re barely hanging in there,” Bales said. “I’ve never seen it this bad.”