Originally published on Together LA.

Perhaps the success of the Union Rescue Mission’s first 5k Walk fundraiser held on Saturday (June 2, 2018) can not be fully gauged by the half million dollars raised (so far) by hundreds of participants, but by the increased level of community involvement.

EXCLUSIVE INTERVIEW
The walk helped the Christian organization that tackles homelessness to move from tapping solely into the rich and famous for funds to inviting the “Average Joe” to be part of the process. A process that includes a leader and partners with epic dreams. 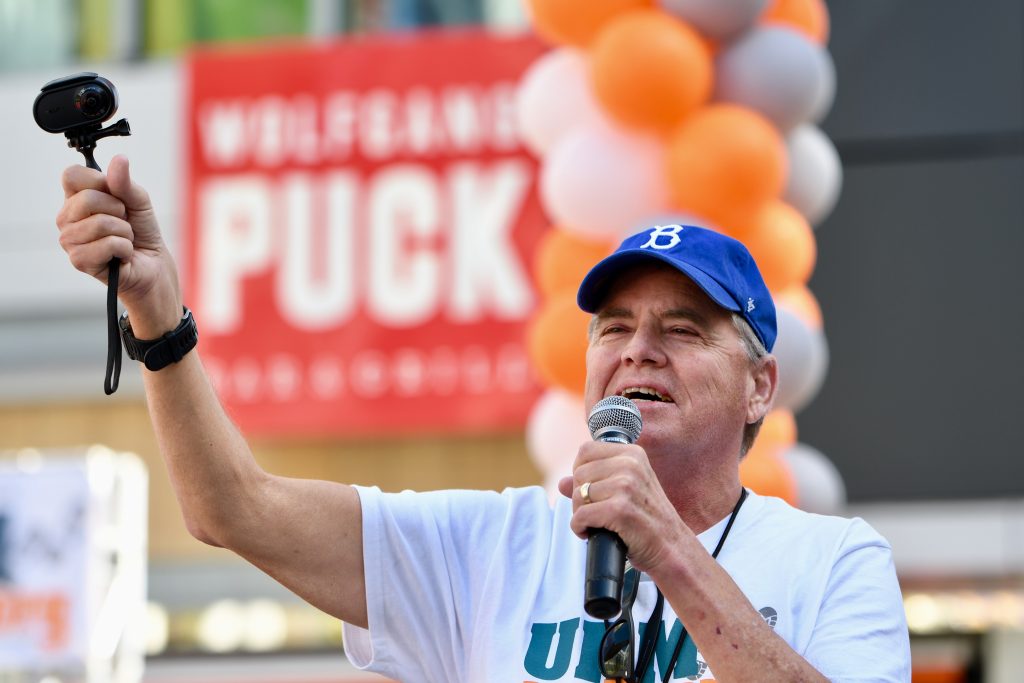 Union Rescue Mission 5kUnion Rescue Mission CEO, Rev. Andrew Bales told Together LA earlier in the week, before the 5k, that the course had to circle LA Live three times rather than having to force businesses on another planned route to shut down for a few hours.

Sponsors at the event’s start and finish line manning booths in between the Staples Center and Microsoft Theater included financial giants like Wells Fargo, Costco, and Herbalife, but there was also a prayer tent hosted by a small Downtown LA church.

A Christian musical group dubbed “The URM Band” led those awaiting the start of the walk in worship and the atmosphere was filled with joy amongst a backdrop of iconic symbols of financial power. The irony was not lost in the small sea of Average Joes.

TLA’s interview with Bales below reveals some of the dynamics of homelessness in the city and the Mission’s plans for the future.

Together LA: Let’s start with the 5K. How did the 5K idea come about?

Rev. Andrew Bales: So the vision I had was while walking from wherever to Skid Row and back. Richard Newcomb, our board member has helped other groups do successful 5Ks. In fact, he does a 5K every year in New Orleans that he does in honor of his dad.

And so years ago, I wanted to do a mud run or something like that and the idea didn’t go over well with our team at that time. But, when Richard came on our board a few years ago and then we had a partner in this idea, we finally had the courage to try to pull it off. So, it really came from Richard and I and his vision for Union Rescue Mission to have a event where the “Average Joe” like us can participate rather than showing up and spending a lot on a ticket to a gala.

TLA: So, prior to this 5K what was your major fundraiser for URM?

Bales: It’s been our Hearts for Hope fundraiser for Hope Gardens, our site for families out in Sylmar. And we did it for many years at the Four Seasons Hotel. [The fundraiser] started as a fashion show and then became like an entertainment night. The last one we had was at the Beverly Hilton and we actually had Angela Bassett as our emcee (or host) for the night.

Our most successful event ever was this Sports LA event at the Hilton three or four years ago where we raised 4.3 million. It wasn’t an URM-hosted event, but we were the beneficiaries. Then, we did our 125th anniversary fall gala at the Beverly Hilton. So, most of our big events have been, you know, kind of expensive.

TLA: If you were to have a dream list fulfilled in regards to your ministry what would that be or what would you like to see happen?

Bales: Well, we’re busy trying to pull off some of our dreams right now. We’re putting up a sprung structure in our back parking lot.

Bales: A sprung structure is heated and air conditioned and it’s more like a permanent tent. It’s not really tent, but it’s like one of those things that people put up to set up a driving range or you know, or hotel puts out for a reception area.

It’s a inexpensive, quick way to respond to the need and it’s going to be for 136 single ladies, it’s going to be in our back parking lot (in the city) because of what we’re doing. The city was encouraged by the Urban Land Institute to model something like we’re doing and to put four sprung structures in every district, 15 districts of the city. But they’ve chosen only to do one at this point. We hope that by us doing our sprung structure that we inspire others to get to that point where we have four in each district by the end of the year, that we put a roof over 13,000 people. I know we need to do more than that, but, but at least that’s a start.

And then we also are putting up a satellite [facility] in south LA County that’ll be like a mini Union Rescue Mission, about 80,000 square feet for 80 families. It will be for 320 total people, so that people in South LA don’t have to come to Skid Row for help. They can go to South LA. We already have Hope Gardens out in Sylmar for over 60 families, moms and kids, and also 24 senior ladies in permanent supportive housing. And what we want to do is have regionalized services in each area of LA County, decentralize Skid Row so that people in every part of LA County can, you know, if they lose their home, they can go right in their own neighborhood and get help and neighborhoods will help their own neighbors so everybody doesn’t have to come to the mean streets of Skid Row.

Then, I would like to create affordable smaller homes. There is a way to do 3D printing, concrete homes that have a bathroom, kitchen, 660 square feet for $10,000 each. And so I, I’d really like to create some neighborhoods of affordable housing that any income could afford to own. So, those are some of the dreams that we have.

TLA: Where would the land be for the homes?

Bales: We have some land. We have 77 acres out in Sylmar and then we have a donor who has 80 other parcels that I’ve been trying to get a hold of. And then, perhaps we have to go as far as Palmdale and Lancaster. The city owns many parcels of land and the Metro Rail owns lots of land. 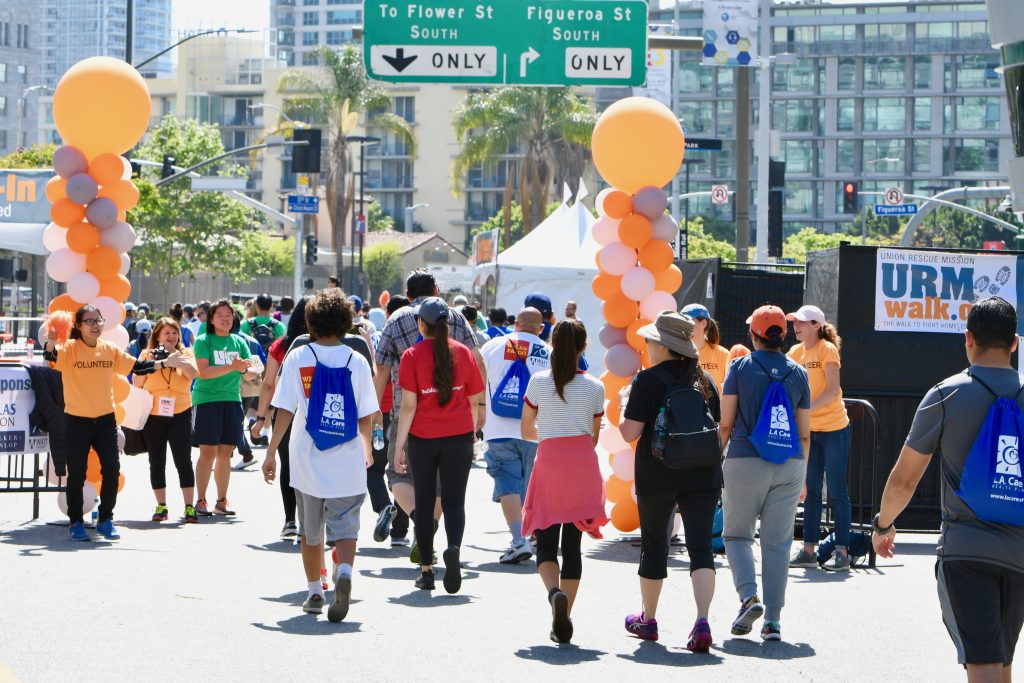 TLA: How, how has your relationship been with the city? It must be pretty good.

Bales: Pretty good. However, they can’t fund us. They won’t fund us. City and County won’t fund us because of our faith. But we have helped model what needs to be done. If you were to call the county 211 number and say, “I’m a dad and mom with three kids,” they’d say the only place to go is Union Rescue Mission. So, they know what we do and respect us and count on us to come through. We never turn away a family with children who comes through our door. We never turn away a woman, a single woman who comes to our door. Rarely would we ever turn away a man. Every night the police call me and see how many bunks we have open and I will never tell them that we have no bunks. So, really we never turn away a man either and that makes us a very unique mission. We’re the only rescue mission that welcomes single men, single women, moms with kids, dads with kids and two parent families with kids.

Bales: If we all work together, we could be like New York City, that puts a roof over 95% of the people experiencing homelessness and is embarrassed about the 5% that are still on the streets. And it’s really an all out, all hands on deck, emergency approach. If we were like that, we would see a different city and we’d live up to be in the City of Angels.

We could live in the city where not one precious human being lives on the streets. And I would love to be part of making that happen in Los Angeles. That would really be the ultimate dream for me. That before I’m gone from this earth that we didn’t wait for heaven to address the situation of homelessness here on earth.

On the Web
https://urm.org/
Note: The deadline for the matching challenge gift to help men, women, children, and families on Skid Row overcome homelessness and begin new lives of hope has been extended to June 30. Go to URM’s website to donate.

“I share my story for my brothers and sisters who are still on the streets, to let them know that escaping the darkness is possible. I share my story to shine a light of hope which is too often overlooked.”

Kenneth Chancey first experienced homelessness at the age of 11, and was a sophomore in high school when his family moved into Union Rescue Mission.

Kenneth was a recipient of the 2017 Dare to Dream Award, and today he works for the City of Los Angeles as a Legislative Deputy to Councilman Marqueece Harris-Dawson.

Please watch his inspiring speech from the Dare to Dream Gala to learn more about how he was able to overcome adversity thanks to the generous support of donors like YOU, who are making a direct impact in the lives of so many.

As Kenneth states in his moving speech, “Helping people house their families, educate their children, and caring for the sick is not an act of charity, but for too many people it may be a lifeline of support that helps them hold on to their life!”

As a result of a devastating fire on Tuesday, December 5th, Hope Garden families were forced to evacuate their homes and temporarily relocate to Union Rescue Mission. As a result, our families are in desperate need of the following items. Monetary donations are also accepted (https://urm.org/hope-gardens-emergency/)

Rev. Andy Bales
@abales
Retweeted Citygate Network
"We Believe" are strong words that capture the attention of those that hear a statement beginning in that manner.… twitter.com/i/web/status/1… 7 hours ago